After a delicious breakfast, we walked across the street (remember to look both directions) to the Dublin Palace. Essentially, the Dublin Palace was the White House for Centuries. Under the castle, is the old castle from the date when Dublin was a walled city. This palace is a terrific place to begin understanding Dublin’s long and elaborate history. 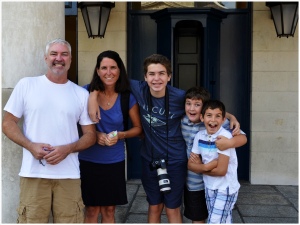 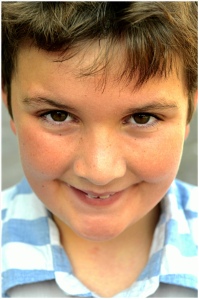 I came to understand that Ireland is country that has always wanted to just be, and whether is was the Vikings (I think they’re actually pretty happy about this Viking invasion as originally the Irish were a bit height-challenged when the Vikings invaded and then began to marry they grew up and away from their leprechaun status. Leprechaun is actually a norse word meaning “little person”) or the Brits; other cultures were always attempting to subjugate the Irish.

Irish History is replete with foiled rebellions and horrible punishments. The Irish have lost great numbers is short periods of time and lived with cruel and inhumane dictators. Amazingly, while they always just “get on with it,” the Irish have developed a no-nonsense, never surrender spirit and they bristle under unfair rules and bureaucracy (their governments and/or anybody else’s). Regardless of their hardships, the Irish don’t dwell on their painful pasts, they don’t become more isolated, they don’t dive deeper into their religions becoming more intolerant of other religions, they remain open and accepting of others (well, there may be a bit of a bias against the Brits, but as they are still occupied by the Brits it kinda within their purview). The Dublin Palace will give you a great introduction to all of this history. The palace is also beautiful.

One of the Guards atop Dublin Palace

Treaty for Independence from England that started a brief and bloody 1919 rebellion. 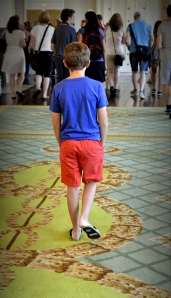 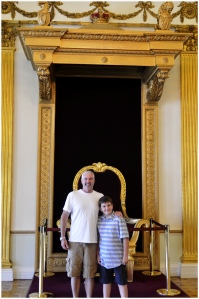 From the Palace, we walked to Kilmainham Gaol (jail). It’s 3.5 miles and the day was beautiful. Brown Bear and I understood that the walk with 3 tired kids might not be their favorite, but walking is the best way to see a city, right? So, tough luck kids, we are walking. I noticed Brown Bear walking a good deal in front of all of us. While she is tall, Brown Bear is no speed walker. I caught up with her at a red light.

“That coffee is treating you well today” I stated, commenting on her speedy gait

” I need a space cushion” she whispered under her breath

“Space cushion?” I wondered if the jet lag was speaking

“I need a space cushion between me and the whining. If there is not a safe amount of space in the cushion then you’re in my bubble and if you are whining and in my bubble we will have problems.” The monotone of her voice made me realize that maybe my presence in her bubble was not altogether welcome. I drifted out of the bubble.

On the way to Kilmainham Gaol

Once we got to former state hospital, spirits rose. The state hospital has beautiful gardens and backs onto beautiful Phoenix and Deer Park. The park ends at the gaol so spirits settled once the goal was in sight. 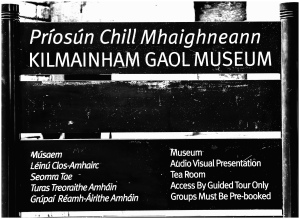 2 thoughts on “Dublin, Part 2 or I Need a Space Cushion”

Where are we today?

Where we have been